There are many ways to personalize a web page, and putting in a free flag background for the country of your choice is one of the easiest. The internet is full of sources for free flag backgrounds from any country you can think of and a few that don't even exist. Here's how you can find yours:

Step One: Picking a Flag

The first question to ask yourself is: what is the purpose of showing the flag? Are you trying to cheer on your favorite world cup contender? Pay tribute to your heritage? Maybe you are simply feeling patriotic during the Fourth of July and want to have Old Glory waving in the background of your site.

Take a moment, though, and look at your site - and at the flag you want to use as a background. One reason that the web 2.0 world is full of solid colors and white space is because it is much easier to read text against a solid and contrasting background. Many flags either have a lot of different shapes and pictures on them, or they have strongly contrasting colors. The American flag has both, and often has other images such as eagles or lady liberty included in the image.

Remember that in terms of background images, the simpler the better. It also might be worthwhile to lighten the image in an editor such as Adobe Photoshop, so that it is more of a suggestion of a flag in the background. 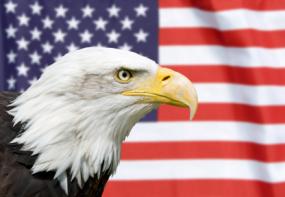 You might think that it is as easy as simply going to Google, typing in the flag of your choice, and grabbing an image (using a right-click and "save image" on Windows, for example). However, the fact is that while there are a plethora of images on the web, they have been created by artists and photographers who work very hard and deserve to have some say about how their images are used.It's called copyright, and the fact is that unless people give explicit permission for you to use their image on your site, you legally can't. That image belongs to them, though you can certainly purchase the rights to use images from stock photography sites such as iStockPhoto.

Luckily, there are a lot of people who also enjoy offering completely free flag backgrounds, either just because they are enthusiastic about the country in particular or because they are supporting their site through ads. Patriot Icon is an example of an intensely American site - complete with downloadable images for either a background or simply to highlight different areas of a site. While it has a few ads, they are quite unobtrusive and happen to fall in line with the theme of the rest of the site - such as securing .US domains, for example.

Regardless of your country of preference, the flag is out there as close as a Google search - or perhaps it is already on a site like WallPaperFree.com. This particular site even includes the stylistic nuance of a three-d ripple effect, and has backgrounds in many sizes for screens from very large to as small as an iPhone.

Using those backgrounds is as simple as downloading the image to your server and then using the background img = "" tag on the website to plaster the image along the background. You can also use CSS to float the image in the center of a screen, choose whether or not it will repeat in horizontal or vertical axes, and more.

Whatever your reasons for using the flag as a background, remember that it is a revered symbol for many and should be treated with the sort of respect you'd want your own country's symbol to be shown.